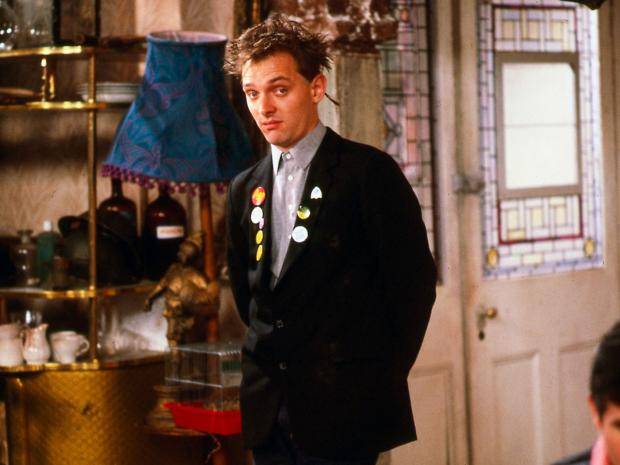 They might have only made 12 episodes of The Young Ones, but damn they were all good! Here we’re going to look at all the best Rik Mayall Young Ones scenes. 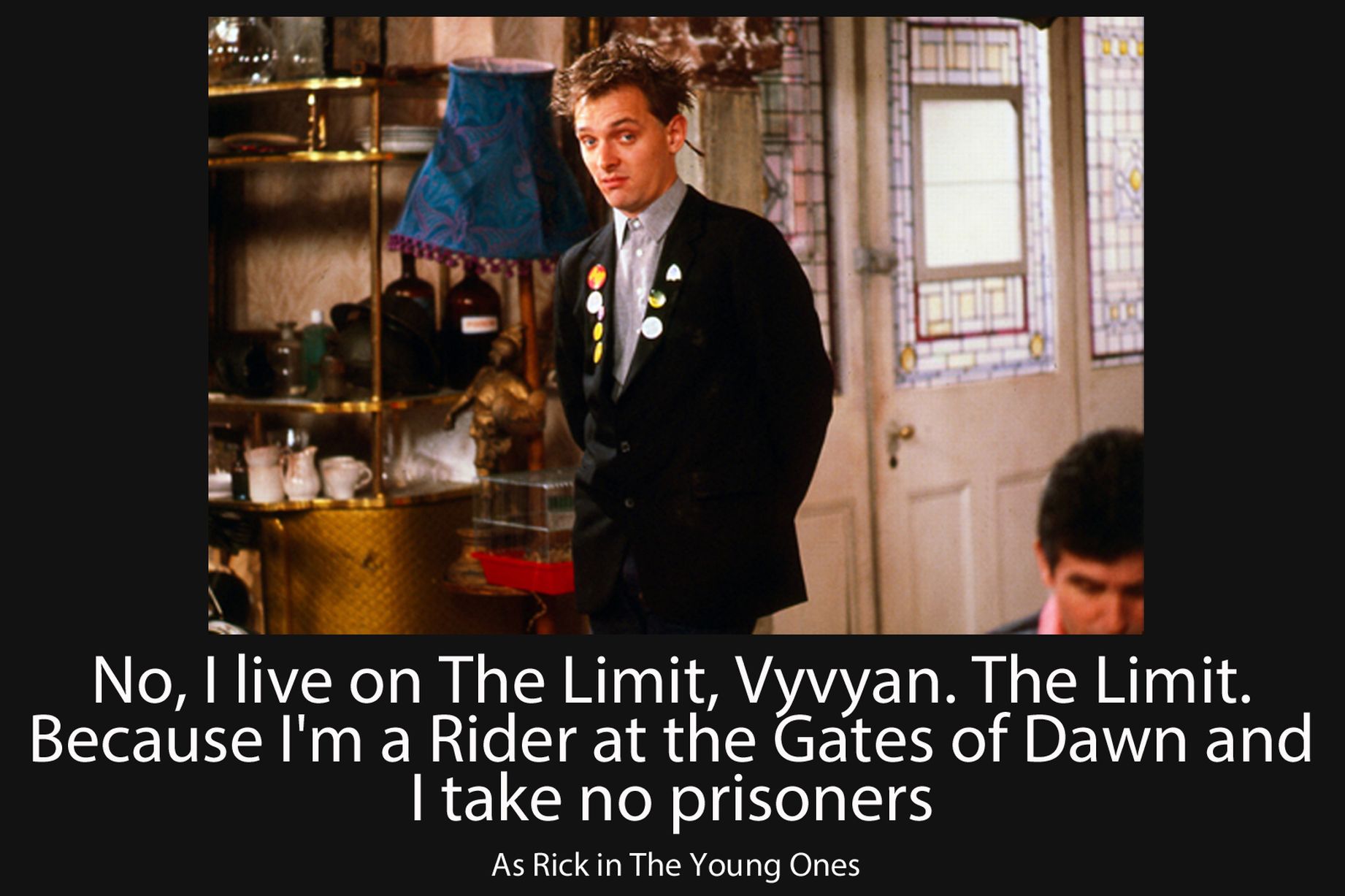 Rick Mayall in The Young Ones

There were four main characters in The Young Ones house, and Rik Mayall played student Rick.

Sometime this was spelt with a silent ‘P’! 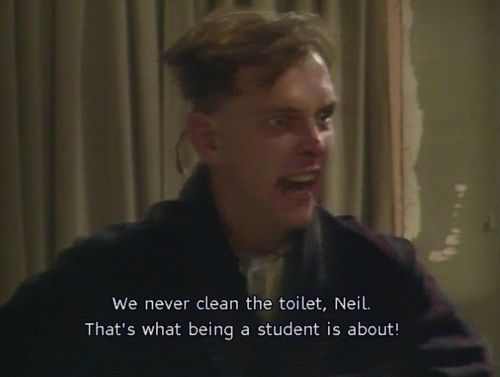 A self-proclaimed Anarchist, Cliff Richard lover and People’s Poet, he took part or was the centre of some of the best Young Ones scenes. Here’s our pick of the 5 best Rik Mayall Young Ones Scenes.

‘Bastard Squad’ is showing on the telly, but all the comfy seats are taken.

Rik ends up with the Rickety Chair, and minutes later an armed siege leaps from the screen and into the house!

2. Rik Mayall Young Ones Scenes – “Ha, Missed both my legs!”

The lads find oil whilst down in the cellar, and the military Junta of Mike and Vyvyan take over.

Bringing the house into line, they force Neil and Rick on the floor.

Rick of course is unable to keep his mouth shut, and Vyvyan administers some punishment with a cricket bat.

3. Rik Mayall Young Ones Scenes – “Telescope with a mouse inside it”

The lads are organising a party, and Rik is very nervous.

In addition to dancing to the Human League and the stereo getting bashed in by the Pigs, Rick looks for a cigarette in someones handbag.

The lads are broke, and end up burning furniture, guitars, and anything that is not nailed down to keep warm.

They decide that one of them has to get a job. Vyvyan’s name is suggested, but all of a sudden he reveals that he is pregnant.

When he is about to give birth, Rick compares their poverty to Victorian times and blames Thatcher.

Nice one Rick! At least he didn’t get aggressive.

This scene is awesome for many reasons, especially with Neil saying that ‘we sow the seed’.

It’s when Rick thinks he has killed Neil though that his true character is revealed. Very funny!

“Neil, the bathroom’s free. Unlike the country under the Thatcherite junta.”

“Well, I’m going to tell Thatcher that we’ve got a bomb. And if she doesn’t do something to help “the kids” by this afternoon, we’re going to blow up England.”

” Pollution, all around. Sometimes up, sometimes down. But always around. Pollution are you coming to my town? Or am I coming to yours? Ha! We’re on different buses, pollution, but we’re both using petrol… bombs.” 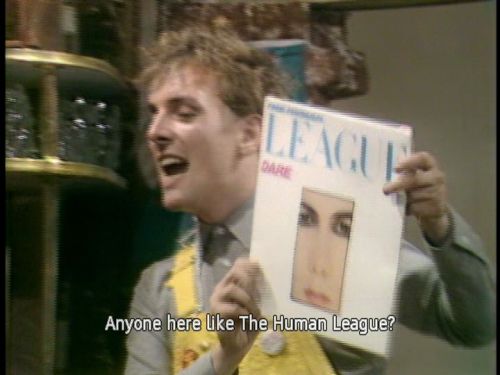 “That’s just typical. Five minutes before the most important party of my life and the house is destroyed by a giant sandwich.”

“Oh, I think that would be very fine behaviour for a Cliff Richard fan!”

I mean, its no wonder the country is in such a state. I dont know why they dont just be honest and hand the whole place over to OxFam. Nothing but scroungers and horrid old people and workshy layabouts all wandering around clutching their Giros’ and trying to get something for nothing. Oh yes, the Post Office seems to be very good at handing out other peoples money, doesn’t it? No wonder my grant’s so small. I suppose next thing there will be rows and rows of little Biafran children, all queing up for a bowl of millet before they become Communists. [shoves man in front out of the way] Excuse me, I was first.”

“Crop rotation in the 14th century was much more widespread…” 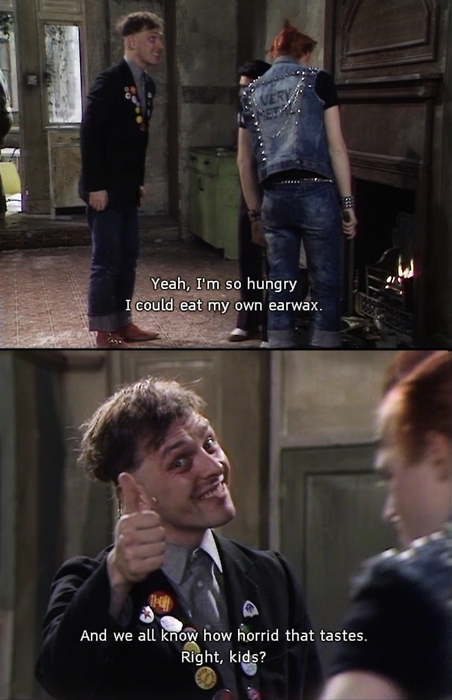 I’m so hungry I could eat my own earwax! 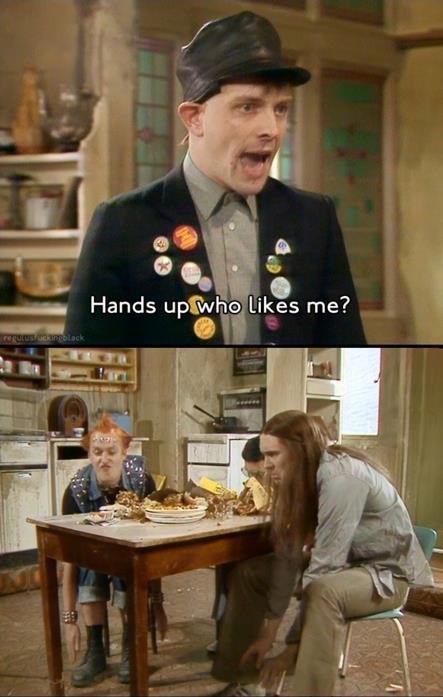 Hands up who likes me?

FAQ About British Comedy Television Series The Young Ones

These are some facts about the British sitcom series:

What was Rick’s surname in The Young Ones?

Rick’s surname is unknown, but it is popularly thought that he is named Pratt.

Which one of The Young Ones died?

On June 9, 2014, Rik Mayall died suddenly and unexpectedly at his home, aged just 56, from a heart attack after going for a run.

Who were the four young ones?

What was UK comedy The Young Ones about?